Toppan Printing develops 55-inch copper touch panel module and begins mass production of general-purpose model
- Wide range of applications including digital signage and electronic blackboards -
Toppan Printing Co., Ltd.（hereafter Toppan Printing; head office: Chiyoda Ward, Tokyo; President & Representative Director: Shingo Kaneko) has developed a 55-inch  electrostatic capacity-type copper touch panel module and will begin mass production of a  general-purpose model from April 2015. It will be provided for a wide range of large monitor applications, such as digital signage and electronic blackboards. As a general-purpose model with fixed specifications it will also be able to respond to needs for small lots and short lead times.
Toppan Printing has developed an electrostatic capacity-type copper touch panel module that packages a film sensor (copper touch sensor), featuring a copper wiring pattern, together with an IC controller or other components. Products have been provided for small- to mid-size monitors (10- to 27-inch) suitable for PCs and mobile devices such as tablet computers since November 2013.
By introducing an IC controller for large-size monitors and module lamination technology, Toppan has commercialized and established a mass production system for a 55-inch copper touch panel module for large touch panels with which the performance of copper can be further exploited. The use of copper as the electrode material has decreased resistance significantly in comparison to other materials, such as ITO, and enabled excellent operational performance even in large-size monitors and a multi-touch capability of up to 10 points.
Making this a general-purpose model can reduce development costs and time compared with conventional customized products, and small lot delivery is also possible. The module will be provided for a wide range of applications, such as digital signage, electronic blackboards and industrial equipment. 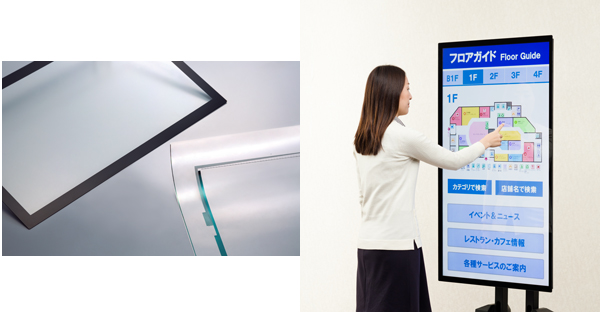 -Features of general-purpose model of 55-inch copper touch panel module
Excellent operational performance has been achieved. Multi-touchcapability of up to 10 points is possible.
Copper wiring decreases resistance significantly (0.01Ω／□ (ohms per square）)and enables excellent operational performance. Multi-touch capability of up to 10 points has become possible, which allows for stress-free touch panel operation similar to that of a smartphone even when using a large display.

Panels flattened and frames made narrower

Flattening of panels and narrowing of frames due to one-sided wiring allow greater flexibility for product design.

*Please consult Toppan Printing regarding sizes other than those of the general-purpose model, pattern customization, and input using a stylus.

-Future developments
Toppan Printing plans to start mass production of 42- and 32-inch general purpose models.
The company is targeting sales of 2 billion yen for its large copper touch panel module business, including the aforementioned models, in FY2015, followed by 5 billion yen in FY2016. Furthermore, 12.1- to 23-inch small/mid-size general purpose models will also be added to the product lineup.
Toppan Printing will continue to develop touch sensors and touch panel modules of even higher performance and quality.
*The names of companies, products and services featured in this press release are the trademarks or registered trademarks of the respective companies.
*The information in this press release is current as of the date of publication and is subject to change without notice.
Inquiry regarding News Release