Toppan Printing Receives Economic Development Award From SMDO 2015
Manufacturing site under construction in Georgia recognized for stimulating local economy
Toppan Printing Co., Ltd.
TOPPAN USA, INC.
Toppan Printing Co., Ltd. (hereafter Toppan Printing) recently received the Economic Development Award, in recognition of its contribution to the local economy, at the South Metro Development Outlook (SMDO) Conference in Atlanta, which is ranked tenth as the fastest growing city in the U.S. with a projected economic growth rate of 3.5% between 2011- 2016. Toppan Printing is located in Atlanta’s southern region, which is also experiencing economic growth.
Toppan Printing has established local subsidiary TOPPAN USA, INC. (hereafter TOPPAN USA) in Georgia, USA and is aiming to complete the company’s new plant and commence mass production in March 2016. This will be Toppan Printing’s first transparent barrier film manufacturing site outside Japan. With the launch of this new plant, Toppan Printing will bolster its capacity to supply transparent barrier films, including GL FILM, to packaging manufacturers in North America and Europe and further expand its business by taking advantage of the new plant’s location. 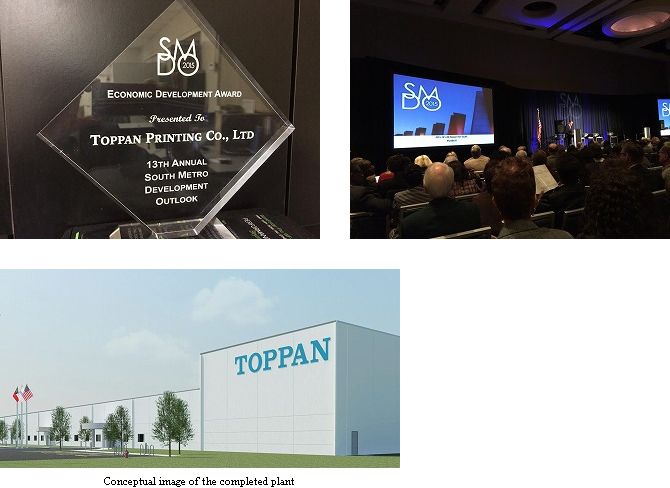 ■About the Economic Development Award
The Economic Development Award represents the exemplary attributes for an individual, company or organization whose project supports, in the broader view, regional goals & initiatives, positive planning through smart growth and innovative ideas and solutions. In addition, successful leveraging of funds, incentives, and relationships, while encouraging collaborations with public/private sectors to coordinate projects is a hallmark. Ideas that have successful applications and that can be replicated in other locations or venues within the South Metro area and beyond are a key component.
Additionally, this award highlights the equally important and specific attributes that impact the local community, by positively affecting the quality of life in the immediate community by producing ancillary benefits to other economic development such as housing, transportation options, preserving natural resources, and forward thinking and ground breaking ideas.

■About Toppan Printing’s barrier film business and TOPPAN USA
・Toppan Printing began sales of transparent barrier films, including GL FILM, in 1986. Today, the company enjoys a significant share of the global market for such films.
・Due to factors such as environmental considerations, Toppan Printing is anticipating further expansion of demand for barrier films in the global packaging market. In particular, demand for barrier films is expected to grow in the North American market, where large structural shifts are taking place in the food packaging industry, such as a need for longer shelf lives brought by changes in lifestyles, and a switch from glass bottles and metal cans to flexible packaging.
・In light of these trends, Toppan Printing will construct a manufacturing site in Georgia, USA from which to provide high-quality transparent films to North America as well as new markets.

*About GL FILM
This is a collective term for original transparent barrier films developed by Toppan Printing. These films enjoy an excellent reputation not only in Japan, but also in overseas markets such as Europe, North America, and Southeast Asia thanks to a wealth of variations suited to different purposes and the world’s highest level barrier performance, achieved using original vapor deposition technology. As a top brand in the transparent barrier film market, GL FILM is currently used for approximately 15,000 products in around 45 countries and regions.